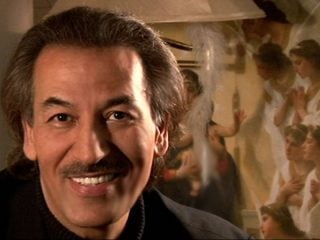 Hassan Jaffer is an interpreter of the human mind and the question of pre-destiny and free will. He combines the logic of his engineering background with his acute sensitivity to human nature to explain the complexities of human experiences through astrology. Hassan expresses his love for the Creator and the human potential in every book he writes and every report he makes for his clients. He expresses his love of the highest reaches of the mind in every Audio he makes.

Hassan discovered that everyone is born with certain predestined internal cycles or “themes” – the timing and duration of which are both destined. These themes are individual experiences rather than actual events. Hassan’s whole focus is to enable you to use your free choice to the best of your ability and to offset any negative “themes”.

Hassan’s books include Leaders and Followers, Revelations of the Hands (Revelation par Les Mains), and Analysis of Famous Charts. Having analyzed thousands of charts – from Renaissance masters to Nobel Prize winners, he uses his research to help his extensive clientele, ranging from media personalities, movie stars, politicians, Royalty, actors, tycoons, businessmen to anyone interested in controlling their destiny.

Hassan has appeared in numerous radio and television shows in Canada and the U.S., where he got great public response to his instant analysis and accurate world predictions.

Hassan conducts his popular workshops throughout North America and also publishes a personalized newsletter “AstroTrends” with worldwide circulation to give timely and helpful advice to his subscribers.

One of the most important forecasts of Hassan was the Japan Tsunami which unfortunately materialized in March 2011. This was originally written in 2004 and discussed in many of his interviews (Nov 2008 and Jan 2010) which are on YouTube and other places. Hassan had been consistently warning about this tsunami in his newsletters and regrets the inability of the media to warn the public about it.

AstroCalendar is a personalized website based on your birth date, time, and place of birth which helps you establish long-term goals and even plan on a daily basis. It makes anyone an instant astrologer in about five minutes! Hassan’s hobbies include sports, art, painting, and playing musical instruments, all of which he considers extremely important to offset his own “themes”! 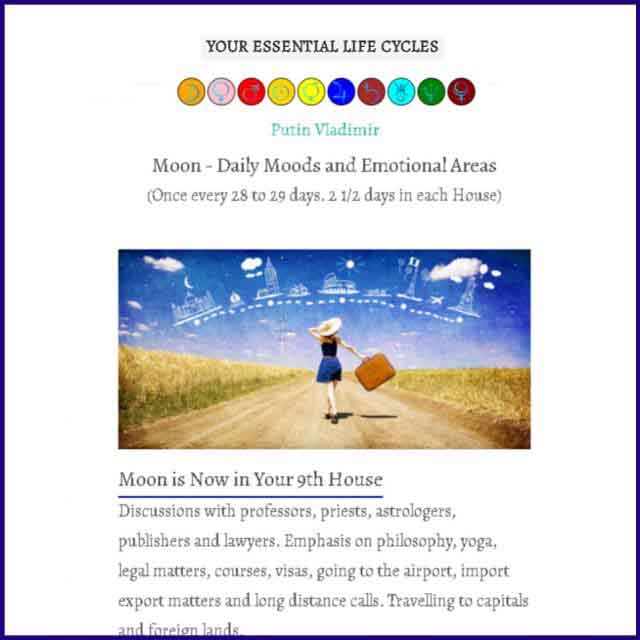 AstroCalendar is your Personalized website and shows your Moon Transits and their meanings on a daily basis plus all the planets and what they mean in your life.  From Pluto’s once-in-a-lifetime events which change your whole attitude towards some area of your life to the saddest but the most inspirational areas, to your luckiest periods, it is all in your Personalized Astro Calendar.  You can go back in time to the day you were born and get an insight into all the important events which happened in your life.

If you are not an existing client, then please send us your birth date, time, and place of birth. AstroCalendar is a Personalized website made just for you!  It shows the Moon Transits and their meanings in your specific chart on a daily basis and you can check out any year from 1900 onward. It is a 12-month subscription and you can also include your children or other people. See the Description Tab for Details and choose the number of people from the pulldown menu.
$45.00 – $150.00

Your Natal Horoscope Chart represents where all the planets were when you were born. It remains the same all your life and represents all your Themes which get touched off by planets as they are moving in the sky. I believe there is a geomagnetic connection between the date, time and place you are born and your horoscope chart. The Earth’s magnetic field is constantly changing you are geomagnetically tagged when you were born!

Our AstroCalendar give you fantastic insight into your inner timing and is probably one of the best ways to understand yourself as well. In less than five mins you will know where the Moon or Venus are in your chart now and what it means!

You are born with many different Themes which represent your talents, your limitations, and the transits represent when and for how long these inner Themes are touched off. My whole purpose of going into astrology was to find the best ways to offset a negative theme and how to use your free choice most effectively. It is easy to change self-pity into compassion for others.

The tears may be part of your destiny but who you cry for is your choice. Similarly, an obsessive theme may be destined but the form of obsession if your free choice!