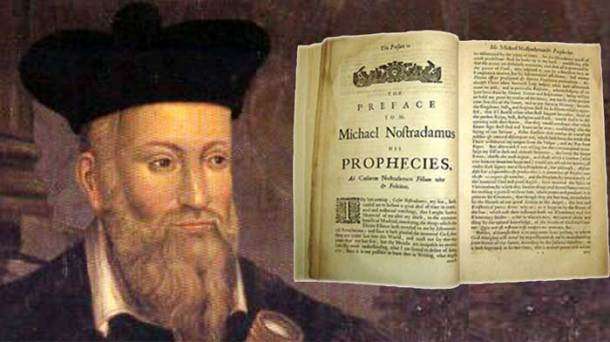 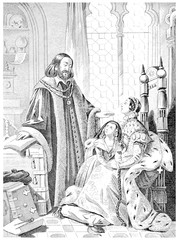 Famous Seer Michel de Nostradamus was born in France on Dec 14, 1503. His amazing prophecies were made in four-line verses, collectively known as Centuries, and were published in 1555. He was a physician and an astrologer who came to prominence in the court of Catherine de Medici, when he predicted the death of her husband, King Henry, in a jousting accident.

He probably wrote what he felt but unfortunately, he only saw disasters! I have never been impressed by his doomsday prophecies even though some of them were quite interesting.

Did Nostradamus have special powers?

Was he a fraud or Nostradamus predictions a conspiracy?

Have people manipulated his work to suit their own purposes?

My analysis and shocking conclusions are based on his natal chart and his transits when Centuries was published.

I rectified his chart giving him late Pisces rising instead of Aries, as he was deeply spiritual and cared for the poor and needy.

The famous seer certainly had psychic abilities (grand trine in Water signs, Moon in Scorpio in 8th house, etc) and probably was quite well-read and thorough (Mercury in Capricorn opp Jupiter).

Water’s sensitivity and Earth’s practicality are always nurturing but his Capricorn and Scorpio planets (materialistic and need for power) made him a “corporate psychic” who selected Kings and not the poor!

He focused more on natural disasters and the reversal of fortunes of those in power. Moon in Scorpio gave him a passion for research, secret codes, and mysteries of life. Moon in Scorpio also gives prophetic insights but more into upheavals than positive events.

Moon trine Mars is another psychic aspect as it intensifies emotions and feelings.

Moon sextile Jupiter (happiness from spirituality and the occult) indicates that he came from a spiritual family and also had a deep faith in God. This aspect often gives visionary powers as well.

Scorpio on 9th indicates religious authorities being his enemies, (he saw his nanny being burnt at the stake when he was only a teenager).

He probably was a deep, serious, introverted, practical person with a lot of focus and concentration. He did not use wild imagination (like some of Edgar Cayce’s premonitions of seven stones neatly laid out at the bed of the ocean!), was immune to tears without being cruel, wrote in point form, and did not waste words nor cared to explain much (Mercury in Capricorn).

In other words, the doomsday prophecies of Nostradamus are almost a pure reflection of his own chart!

He also had a Mars opp. Neptune (wrong hunches and acting upon them) and this is constantly reflected in his prophecies including intrigue, backstabbing, fraud, nightmares, danger through poison, animals, betrayal, etc. Alfred Hitchcock (same natal aspect) shared his nightmares with others in films!

Nostradamus had a Mars conj Saturn in Cancer and wrote a lot about events involving fire and sharp objects. This is an aspect of major authority conflicts which often lead to heart problems, migraine headaches, temper, and flying off the handle.

My conclusion is that he had a benign tumor that touched parts of the brain connecting cosmic consciousness or related to the paranormal phenomenon.

There are certain parts of the brain that, when stimulated by an external probe or an internal tumor, can make you remember the past and communicate with people who have long passed away. I am quite sure that his benign tumor made him lash out with his quatrains whenever he had bouts of temper or headaches.

This is not to say that he did not have the psychic ability but merely that his visions were colored by Moon in Scorpio, Mars conj Saturn in 5th (his two sons and wife died of plague), and Mars-Neptune opposition.

However, Pluto was sextile his Mercury when he wrote his quatrains which bring one closer to Truth. It is the single most important aspect (natal or by transit) when you are closer to universal truths and divine logic. 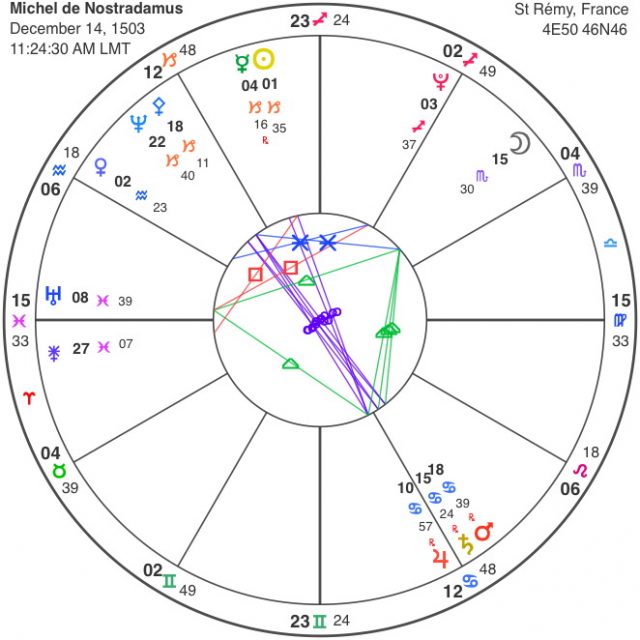 Nostradamus was not given to wishful thinking, but his chart reminds me of an angry preacher who, powerless to change the system, gets even with everyone by talking about God’s wrath.

He was a Sephardic Jew who converted to Catholicism to protect himself from persecution. This also allowed him to sublimate his feelings of persecution and guilt (Saturn opp. Neptune) on others.

Nostradamus must have subconsciously resented those leading a luxurious lifestyle. He worked hard and lead a life of isolation and cherished the power which comes from self-mastery.

He hardly ever wrote in favor of any King and actually became famous for his predictions about their doom!

He saw a series of events with no relation to time. People usually remember the passage of time through events which serve as time markers. The changes in these events lead to the awareness of time as well.

The doomsday prophecies of Nostradamus hardly changed from one to the other and were not time-related to him at all. He was talking about the same themes with slight changes over and over again. In essence, many of his predictions had a pragmatic basis despite their often superstitious interpretations.

His morbid fascination with the mysterious elements of gloom and doom along with his Mars-Neptune opposition may have been the burning meteorites, devastating fires, hail, and storm, and lightning he experienced in his head.

However, it is possible that some of these events touched the cosmic consciousness and became uncannily accurate. It is unfortunate though that there was hardly any positive event foretold by the great Seer.

The tabloids are big business and capitalize on doomsday prophecies by playing on the insecurities and phobias of the masses.

Pluto is now in Sagittarius (once in about 246 years) exactly where it was when Nostradamus was born! It is a strange synchronicity that your Sagittarius author was born three days before Nostradamus, and is re-evaluated his chart when Pluto was in Sagittarius when we are to redefine our philosophical concepts!

To make the best decisions about the most important events in your life concerning your finances, health, travel, relationships, and even accident prone days: Get Your 12 Month ForecastNOW.