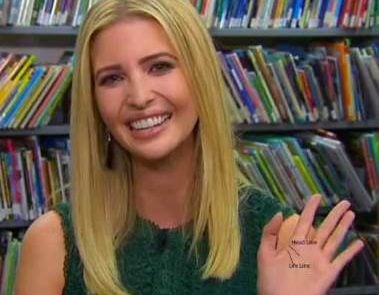 Ivanka Trump has a very positive chart and dynamic chart. She is very feminine looking yet is confident and has many of the successful traits often found in men. It is a perfect Yin and Yang balance and her Hands show this as well.

Being a mother with three children gives her the nurturing ability and her business acumen is obvious from her chart. Although she has Sun in Scorpio, Ivanka has three planets in Libra which is one of the best signs for female executives. She has a really good legal mind and management skills (Mercury in Libra well aspected).

What I found very positive about Ivanka is that her Head line is totally separate from her Life line. This is much more common with men than with women and it is the hallmark of those who are naturally optimistic, bold and action-oriented.

I wrote extensively about this in my book Leaders and Followers – Are You A Rule Maker or a Rule Breaker? These are the leaders who are great motivators and are very enthusiastic and passionate about everything they do.  They are excellent orators who are known to easily motivate others (Bill Clinton and Barak Obama).  They normally look for positive qualities in others rather than harping on negative traits.  These individuals are better suited to be visionaries of the company rather than the workers.

Most women with Head line separate cannot handle the sudden bursts of energy and power and feeling of being on top of the world, without being rude or outlandish in their clothing (Madonna, Rihanna, Beyonce, Katy Perry, Lindsay Lohan, and even Britney Spears). The fact that Ivanka Trump is able to retain her femininity along with her being dynamic is a rare talent in women.

Ivanka’s widely separate Head line is the single most important indicator of her success in life and her children have made her much more “normal” as a woman and as a mother. You would hardly ever find a woman with her Head line so separate not treating her children as a project.

Mercury close to Jupiter makes her like a good preacher and Mercury conj Pluto indicates that she can also be a bit bossy and has to be careful of her words as she can violate the divine truth. However, this is also an aspect of changing your attitude towards religion (she converted to Judaism). This may actually help her as she practices the Sabbath and other positive themes which balance her jet-setter lifestyle.

Mercury conj Pluto is a powerful aspect but Mercury in Libra sxt Venus hides the sarcastic wit well. In men, the Mercury-Pluto aspect is more dangerous than in women as men tend to become arrogant and misuse their power more readily. I am sure some of her employees might think of her as an intellectual dictator but that is quite extreme. It seems the Pluto aspect adds a Scorpio kind of intensity to her mission to help women.

Venus sxt Jupiter is one of the wealthiest aspects to have and is the hallmark of those who can make millions in wholesale rather than from routine work. Saturn being close to Mercury makes her much more productive and hands-on. It also makes her much better in terms of management. In fact, even though Saturn Mercury can make a person more cautious and delays communication, she needs that discipline to organize her time between her family and her career.

Venus in Sagittarius gives a love of foreign countries, foreign lands, and foreign people. Venus close to Neptune makes one extremely romantic but by itself, it is also one of the signs of sadness in romance or being unrealistic and very idealistic. However, Ivanka belongs to a very philosophical age group with Neptune in Sagittarius (Martin Luther King and Abraham Lincoln) and her Venus is also well aspected to Saturn. Venus in Sagittarius sxt Saturn is reflective of her success in her fashion business. Venus-Neptune also gives a seductive aura and makes one more photogenic.

Mars in Virgo makes her health-conscious and squared to Moon may give a short temper from time to time.  It also indicates that she puts her heart and soul in everything she does. Sun in Scorpio sxt Mars also gives her extra energy and makes her more action-oriented.

Those who have the Head line widely separate from the Life line need the Saturn-Mercury aspects for achievement and she certainly has achieved a lot already.  With a Mercury-Pluto aspect in the legal sign of Libra, I am sure she will be instrumental in changing the policies for women and childcare.

Mercury sxt Venus and sxt Neptune make her very eloquent with a beautiful voice and also gives her the ability to outsmart the crooks without being one! She has inherited this from her father but in his case, he is like a saint and a con artist put together!

Donald Trump has Mercury sq Neptune and is very intuitive but cannot separate truth from fantasy. he is like a Mensa person who can keep making the same mistake once his emotions get involved. However, he is also very caring and understanding and she has inherited this trait but is more objective while he is more feeling and wiser.

Ivanka has some excellent transits from Jupiter and Saturn for one year even as she goes through a bit of a testing period when it comes to love matters (Saturn touching off her Venus) where she may be too busy with all the career and public eye.

She has to be careful of the Uranus opp Mercury by transit as if often shows sudden shocks through which you recover. Although it is good for brilliant ideas she needs to pace herself and more mental relaxation.

previous
Elizabeth Smart
next
Jupiter in Libra and Peace Initiative

by Hassan Jaffer ~ People tend to be more dramatic and flamboyant now. Take advantage of the grand feeling and focus on publicity, weddings, buying expensive designer clothes now but be careful of overspending. It is easy to forget your means and overindulge your taste. This is an excellent time for launching new products, public relations, public speeches, and theatrical reviews. People are more susceptible to heat-related illnesses now. Today's color is Gold. Hassan Jaffer